Sushi is one of those thing that are just fun to eat out! The experience of eating new and exciting foods, the chopsticks, sake, and awesome atmosphere offered at most sushi establishments simply can’t be replicated at home. Sushi is a safe option… It’s just rice and raw fish, right?! Sushi can be a great option depending on the level of quality and awareness of restaurant staff. Wasabi, edamame and the rice itself can contain hidden forms of gluten. We present a guide that will help you navigate your next sushi experience as an informed diner.

The word sushi loosely means “sour-tasting”, which refers to the vinegar mixed with white rice to make what we call sushi rice. Grain vinegar is sometimes used, which contains wheat or barley. To be safe ask for Plain Rice, sans vinegar, and be sure to let your server know you have a gluten allergy.

Soy sauce usually contains quite a large amount of wheat which acts a a filler. Ask for Gluten Free Tamari Soy Sauce or bring your own personal sized bottle. Not all tamari soy sauce is gluten free so be sure to specify. Suggest your non-gluten free friends try tamari soy sauce as it has a more pleasing, complex flavor.

Tempura is a no-no unless the restaurant uses gluten free batter and a gluten free designated fryer. Typically tempura is coated with a wheat mixture. When an item is described as having “Crunch” or “Crisp” included, they’re talking about bits of fried wheat flakes. Steer clear of Deep Fried rolls and other fried items to avoid cross-contamination and wheat based batters. Tobiko or Fish Roe may be stored in a liquid that contains gluten. Rarely Sesame Seeds are stored in gluten as well.

Stay away from anything described as “Spicy”, one example being spicy tuna. It will likely be made with a mayo-type dressing which contains wheat. Similar dressing will be included in Specialty Rolls or to decorate the plate your meal is served on. Ask for no sauces of any kind. Dipping Sauces may also contain hidden wheat. Unagi, Eel in Japanese is coated in a brown sauce which is mixed with wheat or barley.

Fresh Wasabi (Japanese horseradish) not only tastes better but it also does not contain…you guessed it…wheat or barley which is added to thicken most pre-made wasabi.

Some restaurants use Seaweed Paper that has been pre-dipped in glutenous soy sauce to wrap their rolls and in other various dishes. Your sushi chef should be able to tell you whether pure seaweed paper is used. Opt for Soy Paper if you have any doubts.

California Rolls the base for many rolls are made with Imitation Crab, which is pretty much the hotdog of the sushi bar. Also called crab stick, it is a mix of white fish flesh and a binding agent, usually wheat, formed into the shape of a crab leg meat. Yum? Do your tummy and tastebuds a favor and ask for solid Real Crab meat as a substitute. Everyone knows the real thing is better and you’ll get Omega-3s and heart healthy amino acids. Double win!!

Drinks! If you’re ordering Sake or sake based Cocktails, ask for Gekkeikan, Ty-Ko or Rock Sake. House Sake will not be of the highest quality and may be processed with wheat or barley.

Sashimi is a great option if you’re looking for an authentic and uncomplicated dish. Ask for plain rice to accompany your meal and for Ponzu Sauce to be omitted. Nigiri style sushi is individual slices of fish with wasabi over rice. Ask for plain rice and fresh wasabi. Sit at the bar! Sushi chefs generally love sharing the best fish directly with guests. Have a Gekkeikan cocktail, buy your chef a sake for extra points, and watch your delicious meal expertly made right before your eyes. 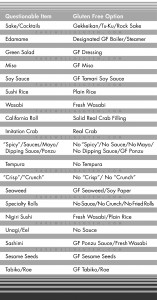